Belize (in English: Belize) is a sovereign country of America located in the extreme northeast of Central America whose form of government is the parliamentary constitutional monarchy. The capital is the city of Belmopan and the most populated city is the City of Belize.

It limits the north with Mexico and the south and the west with Guatemala. The Gulf of Honduras separates it from the country of the same name, which is why it was formerly known as British Honduras until it acquired its current name due to the city of Belize (Mayan Holzuz) and the river on whose mouth it is built. Its capital is Belmopan and the city of Belize, the former capital of the country, is the main urban agglomeration and also the main port that is nearby.

Although the predominant languages ​​are Spanish and Belizean Creole, Belize is the only country in Central America where the official language is English, the mother tongue of 3% of the population, understanding then that Belize’s independence was carried out by the British settlers themselves and not by the Belizean population, otherwise Belizean Creole would be the official language or Spanish, due to the large number of Spanish speakers as their mother tongue. This makes Belize share a common past, not only with the countries of Central America, but also with the Caribbean. It is part of the Caricom and the Central American Integration System (SICA). It should be noted that Belize is the only country in Latin America that does not support the claim of Argentina on the question of the Malvinas Islands, instead it has given its total and absolute support to the United Kingdom who administers them within the context of the Decolonization Committee of the United Nations whose objective is to eliminate colonialism.

The main airport, Philip S.W. International Airport Goldson, is located 10 miles from Belize City, and is operated by the Airports Authority of Belize. Regular international services are maintained by five airlines that travel to and from the United States of America, Central America and Mexico. The government has many aircraft. Domestic air services provide connections to the main populations, as well as to four of the offshore islands.

The main port is in Belize City, and is today equipped with a modern deepwater port, which is capable of handling container shipments. Nine large shipping lines move cargo to and from Belize for Central and North America, Europe, and Japan. The second most important port, Comerce Bight, which is south of Dangriga, has been upgraded to accommodate the medium-sized ships required to handle the growing number of banana and citrus products exports. A new port has been built in Big Creek. Coastal services are operated between the towns and villages on the continent to some of the offshore islands, and to Puerto Barrios, in Guatemala.

The Blue Hole is a diving attraction in Belize, especially for divers with an appreciation of the geographical phenomenon, this is your chance to explore the famous Blue Hole. Part of the Lighthouse Reef System approximately 62 miles (100 km) from Belize City, the almost perfect blue circle of the Blue Hole has a radius of more than 1000 feet (305mts). This is the most amazing dive site found anywhere. the world. Located in the center of the Lighthouse Reef Atoll, the Blue Hole is a long water hole 480 feet (145 meters) deep, which gives it the blue color which makes these structures known throughout the world as “blue holes” ”

The coral actually breaks the surface in many sections at low tide. Except for two narrow channels, the reef surrounds the hole. This hole itself is the opening to a system of caves and passages that penetrate its underwater mountain. In several places large calcified stalactites hang from what was once the roof of air-filled caves before the end of the Ice Age. The hole is the opening to what was a dry cave formation during the Ice Age. When the ice melted and the sea level rose, the caves flooded creating what is now a magnet for many divers. Today the Blue Hole is famous for its sponges, barracuda, coral, angelfish, and a school of sharks often seen guarding the edge of the hole.

A stalactite marks the entrance to the underwater cave system of the Blue Hole. This famous hole in Lighthouse Reef, became an icon of Belize after the renowned researcher Jacques Cousteau, explored it in 1970. On top of the thousand-foot circular reef, snorkelers revel in corals, energetic fish and sponges. The edge descends 90 feet at 60 degrees, then drops vertically at 120 feet. The caverns of the mammoth pierce the walls.

The entrance to the cavern can not be reached without descending more than 110 feet (34 meters) under a sloping stone wall – about 10 feet (3 meters) lower than the maximum recommended depth for non-professional divers. At these depths, a diver has only a few minutes before the air he breathes becomes dangerous due to his high levels of nitrogen that he accumulated in the blood.

Half of Belize is covered by dense jungle, and eighty percent of its rainforest remains under government protection, largely unexplored. These tropical forests provide a habitat for a wide variety of animals including the jaguar, the puma, the ocelot, the armadillo, the tapir and the crocodile. The country is also home to 4,000 species of tropical flowers, including 250 types of orchids. It hosts more than 500 species of birds that fly through Belize from wine harvests: keel-billed toucans (Belize’s national bird); jabiru stork, the largest flying bird in the Americas; the rare herons; hummingbirds; Neon green parrots, a great abundance of macaws, herons and egrets that delight the eyes of ecological travelers.

Toledo, the southern district of Belize, has 1,669 square kilometers of tropical jungle, mountains, rivers, and Mayan villages. Toledo residents often refer to their home as “the land of the forgotten” – it is the least visited destination in Belize. As it is the least popular and the least developed region in the country, Toledo is undoubtedly for the unusual tourist. However, for those with the adventurous spirit of dirt roads, the natural and cultural diversity of Toledo makes a visit to southern Belize a unique adventure. The land was covered with some of the most pristine tropical forests in Belize. The highlands of the Northwest consist of the foothills of the Mayan Mountains bordered by outcrops of limestone – rugged, unexplored territory.

An important part of the history of Belize are the Mayan ruins, a heritage of exceptional palaces and temples. The Mayan civilization began around the year 1500 a. of J.C. and began to decline in 900 AD, although some Mayan cultural centers continued to be occupied until the arrival of the Spanish in the 15th century. It was thought that the population of Belize was more than 1 million people during the classical period (250 AD a 900 AD) when Belize became the heart of the Mayan civilization. To this day, there is still a significant Mayan population that lives in small towns throughout the country. 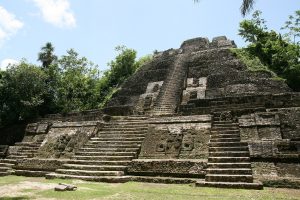 The oldest Mayan Ruin seems to be Neck in Orange Walk. Then came the pre-Classical era in which the cities of Lamanai, home to the largest pre-classical structure in the Mayan world, and Cerros prospered. In the classic period, supreme period for the Mayan Civilization, the enormous sites of Caracol and El Pilar raised the forest and ceremonial centers like Xunantunich built with beautiful temples and pyramids.

The ancient Maya world centered on the Yukatán Peninsula, overflowing into the lowland rainforests of Mexico to the east and Belize to the west, finally rising to the highlands of Guatemala by the Pacific coast. The eastern edges of Honduras and El Salvador were also part of the Mayan world. Today, most Mayans live in three areas: the Guatemalan Altiplano, the Yukatán Peninsula and Chiapas Mexico. Currently, Mayan number is between four and six million divided into many different ethnic groups that speak about 30 different languages.

At present most of the sites are under excavation and preservation, but some sites such as Cerros lack the necessary funding to conserve it. It is important to conserve these sites as durable monuments of the great Mayan civilization.

Currency and Type of change:

The official currency is Belizean Dollar (BZ $).
The exchange rate is approximately 2 for each US dollar.
It is recommended to always travel with US dollars and make the change in the country of destination.

Citizens of the US, the European Union and Commonwealth countries do not need a visa if they have a passport and a ticket back to their country. Most other nationalities require a visa. The British Embassy usually handles the diplomatic affairs of Belize.

There are no required vaccines for travel to Belize, although in some provinces there is a risk of malaria, according to the Centers for Disease Control and Prevention, which publishes its recommendations at www.cdc.gov.

The CDC Bible for medical recommendations is called the Yellow Book available online. From the travel section of the website, select the “Yellow Book / Custom Report” to find risk assessments for yellow fever and malaria.

It feels good to be in a country where the prime minister comes to a school function and only walks through the hotel with his wife. Belize does not have serious security problems. In what part of the world could the most important man in power do this? Tourism security is always a main concern and under no circumstances will be compromised. But remember, no matter where you are, it is always good not to trust when you walk on the streets, even in the city where you live!

What clothes to take to Belize:

Belize is a very informal country with a very casual lifestyle. Unless you are invited to a government event, please leave your formal attire at home. If you are going to visit the Cayes or the coral reef, bring your shorts, t-shirts, swimsuits and some comfortable tennis or deck shoes. The sun is probably more intense than what you are used to at home so bring a hat to protect your head when you are sailing or fishing.

Belize Telecommunications Limited (BTL), a private company, handles all the telephone services in the country. BTL operates a regional service to Mexico, Guatemala, Central and South America, as well as other external services. A recent scheduled expansion has doubled the capacity of the telephone system. A satellite station on land in Belmopan provides high quality telecommunications to the outside world.

This website uses cookies to improve your experience while you navigate through the website. Out of these, the cookies that are categorized as necessary are stored on your browser as they are essential for the working of basic functionalities of the website. We also use third-party cookies that help us analyze and understand how you use this website. These cookies will be stored in your browser only with your consent. You also have the option to opt-out of these cookies. But opting out of some of these cookies may affect your browsing experience.
Necessary Always Enabled
Necessary cookies are absolutely essential for the website to function properly. This category only includes cookies that ensures basic functionalities and security features of the website. These cookies do not store any personal information.
Non-necessary
Any cookies that may not be particularly necessary for the website to function and is used specifically to collect user personal data via analytics, ads, other embedded contents are termed as non-necessary cookies. It is mandatory to procure user consent prior to running these cookies on your website.
SAVE & ACCEPT